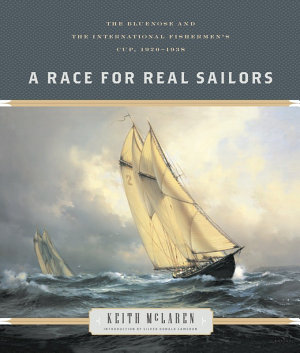 In the summer of 1920, the public following the latest America’s Cup series were frustrated to find that every time the wind got up, the organizers called off the race. There was muttering in the taverns of Halifax and Lunenburg: why not show these fancy yachtsmen what real sailors can do? A Nova Scotia newspaper donated a trophy and put out a challenge to their rivals in New England, inviting them to meet the Maritimes’ best in a “race for real sailors.” A Race for Real Sailors is a vibrant history of the Fishermen’s Cup series, which dominated sporting headlines between the two world wars. The salt spray practically blows off the page as the author’s arresting style captures the drama of each race and the personalities of the ships that contested them: the Delawana and the Esperanto, the Columbia and the Gertrude L. Thebaud, and dominating them all the Bluenose, the big brute from Lunenburg whose image shines on the Canadian dime to this day. Vying for the spotlight are the boats’ larger-than-life skippers, among them Marty Welch, the hard-charging American who first took the cup; Ben Pine, the Gloucester scrap dealer whose passion kept the races afloat when they seemed destined to fade away; and the irascible, impossible Angus Walters, master of the Bluenose, who repeatedly broke American hearts but whose own heart was broken by Canada’s refusal to come to the rescue of his beloved vessel. This stirring and poignant tale is illustrated with 51 historical photographs and five maps, and rounded out by a glossary of sailing terms and an appendix of the ever-changing race rules. This is a story that will keep even confirmed landlubbers pegged to their seats, a tale of iron men and wooden ships whose time will never come again.

A Race for Real Sailors

Authors: Keith McLaren
Categories: Transportation
In the summer of 1920, the public following the latest America’s Cup series were frustrated to find that every time the wind got up, the organizers called off

A Race for Real Sailors: The Bluenose and the International Fishermen's Cup, 1920-1938

Authors: Keith McLaren
Categories: Transportation
The exciting tale of the Bluenose and the International Fishermen's Cup series is now available in trade paper, just in time for the Canadian icon's centennial.

A Race for Real Sailors

Authors: R. Keith McLaren
Categories: Transportation
Exhaustively researched in archives in both the U. S. and Canada, A Race for Real Sailors is a vibrant history of the Fishermen's Cup series, which dominated sp

A Tale of a Mother, Her Three Boys, and Their Dog

Authors: Byron B. Oberst M.D., FAAP
Categories: Family & Relationships
This tale is one of the great romances of modern times and is accompanied by the many trials and tribulations endured by an average family. It contains love, pa

The Sailors' Magazine and Seamen's Friend

The Sailor's Magazine, and Naval Journal