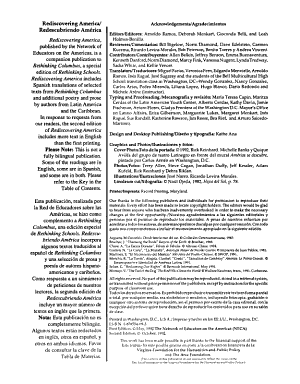 This document makes the argument that since the European conquest of the Western Hemisphere, society has had a policy of "covering" the history of the indigenous people. The systems of religion, farming, government, education, and the economy of native peoples from the Arctic to Tierra del Fuego were outlawed and repressed. Textbooks today either distort or have nothing to say about the history of indigenous resistance to conquest and African resistance to slavery. Covering goes beyond the lines of race and ethnicity to all subordinate groups. The world is in desperate need of rethinking. In this process children may begin to lose Columbus and other explorers and leaders as heroes. In exchange they may gain a much richer sense of their own history. Divided into five chronological, thematic sections, the book, through essays, poems, and stories: (1) seeks to encourage a comparative study of political and economic systems of Europe and pre-conquest America; (2) describes how one can teach about the conquest and its legacy, suggesting that the myth of the conquest teaches children which voices to listen for and which to ignore; (3) documents the impact of the new world order following the conquest, colonialism, on people's ability to support their families and protect their cultures, the environment, national economic development, and sovereignty; (4) presents the views of liberation theology, and movements for social justice; and (5) shares stories and visions of poets and community workers who have taken up the challenge to create a new vision of America. (DK).

Authors:
Categories: America
This document makes the argument that since the European conquest of the Western Hemisphere, society has had a policy of "covering" the history of the indigenou