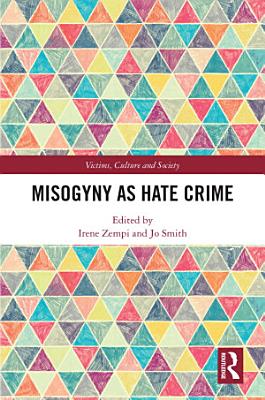 Misogyny as Hate Crime explores the background, nature and consequences of misogyny as well as the legal framework and UK policy responses associated with misogyny as a form of hate crime. Taking an intersectional approach, the book looks at how experiences of misogyny may intersect with other forms of hate crime such as disablism, Islamophobia, antisemitism and transphobia. From the sexist and derogatory comments about women by former US President Donald Trump, to legislative changes in Chile and Peru making street harassment illegal, misogyny presents a challenge to scholars, practitioners, policy makers, and women globally. The increasing importance of the internet has seen misogyny move into these digital spaces but has also provided a platform for movements such as #MeToo and #TimesUp, highlighting the scale of sexual harassment and abuse. In 2016, Nottinghamshire Police in partnership with Nottingham Women’s Centre became the first force in England and Wales to record misogyny as a hate crime. Since then other police forces have introduced similar schemes to tackle misogyny. More recently, the Law Commission of England and Wales has undertaken a review of the legislation on hate crime and in their consultation paper of proposals for reform have suggested ‘adding sex or gender to the protected characteristics’. In March 2021, the Government announced that police forces in England and Wales will be required to record crimes motivated by hostility based on sex or gender from this autumn. The murder of Sarah Everard has been a ‘watershed moment’ in the Government’s response to violence against women. Sarah Everard’s kidnap and murder who went missing while walking home from a friend’s flat in South London on 3 March 2021, ignited a national conversation about violence against women. Against this background, the book speaks both to the proposed reforms of the hate crime legislation around misogyny, and the broader issues around experiences of and legal responses to misogyny. It showcases the work of leading scholars in this area alongside that of activists and practitioners, whose work has been invaluable in opening up public discussion on misogynistic hate crime and encouraging wider social change. In recognising the intersections of different forms of prejudice, the book provides an innovative contribution to these ‘hate debates’, highlighting the complexities of creating separate strands of hate crime. Providing a comprehensive understanding of the debates around inclusion of misogyny as a form of hate crime, this ground-breaking book will be of great interest to students, scholars and activists interested in gender, hate crime, feminism, criminology, law, policing and sociology.

Authors: Irene Zempi
Categories: Law
Misogyny as Hate Crime explores the background, nature and consequences of misogyny as well as the legal framework and UK policy responses associated with misog

Authors: Kim Barker
Categories: Law
The ideal of an inclusive and participatory Internet has been undermined by the rise of misogynistic abuse on social media platforms. However, limited progress

Authors: Kim Barker
Categories:
The ideal of an inclusive and participatory Internet has been undermined by the rise of misogynistic abuse on social media platforms. However, limited progress

Authors: Taylor & Francis Group
Categories:
Misogyny as Hate Crime explores the background, nature and consequences of misogyny as well as the legal framework and UK policy responses associated with misog

Online Misogyny as a Hate Crime

Authors: Kim Barker
Categories: Hate crimes
The ideal of an inclusive and participatory Internet has been undermined by the rise of misogynistic abuse on social media platforms. However, limited progress

Authors: Karen Lumsden
Categories: Social Science
This book explores the discrimination encountered and propagated by individuals in online environments. The editors develop the concept of 'online othering' as

Authors: Rosie Campbell
Categories: Social Science
This book brings together literature, empirical research findings from two projects, and policy analysis to examine how some forces in England have adopted the

Authors: Edward Hall
Categories: Social Science
Providing a much-needed perspective on exclusion and discrimination, this book offers a distinct spatial approach to the topic of hate studies. Of interest to a

Violence Against Women, Hate and Law

Authors: Kim Barker
Categories: Social Science
This book presents the first academic study offering a holistic assessment of violence against women (VAW) in Scotland, both online and offline. In particular,

Authors: Louise Mullany
Categories: Language Arts & Disciplines
This edited book presents contemporary empirical research investigating the use of language in professional settings, drawing on the contributions of a set of i