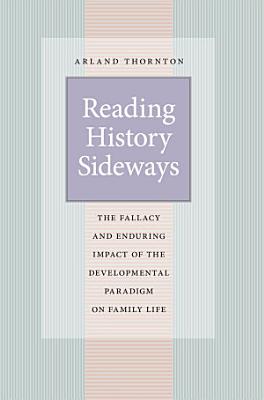 European and American scholars from the eighteenth through the mid-twentieth centuries thought that all societies passed through the same developmental stages, from primitive to advanced. Implicit in this developmental paradigm—one that has affected generations of thought on societal development—was the assumption that one could "read history sideways." That is, one could see what the earlier stages of a modern Western society looked like by examining contemporaneous so-called primitive societies in other parts of the world. In Reading History Sideways, leading family scholar Arland Thornton demonstrates how this approach, though long since discredited, has permeated Western ideas and values about the family. Further, its domination of social science for centuries caused the misinterpretation of Western trends in family structure, marriage, fertility, and parent-child relations. Revisiting the "developmental fallacy," Thornton here traces its central role in changes in the Western world, from marriage to gender roles to adolescent sexuality. Through public policies, aid programs, and colonialism, it continues to reshape families in non-Western societies as well.