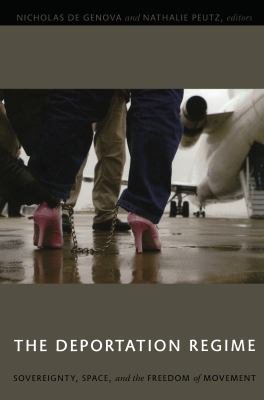 This important collection examines deportation as an increasingly global mechanism of state control. Anthropologists, historians, legal scholars, and sociologists consider not only the physical expulsion of noncitizens but also the social discipline and labor subordination resulting from deportability, the threat of forced removal. They explore practices and experiences of deportation in regional and national settings from the U.S.-Mexico border to Israel, and from Somalia to Switzerland. They also address broader questions, including the ontological significance of freedom of movement; the historical antecedents of deportation, such as banishment and exile; and the development, entrenchment, and consequences of organizing sovereign power and framing individual rights by territory. Whether investigating the power that individual and corporate sponsors have over the fate of foreign laborers in Bahrain, the implications of Germany’s temporary suspension of deportation orders for pregnant and ill migrants, or the significance of the detention camp, the contributors reveal how deportation reflects and reproduces notions about public health, racial purity, and class privilege. They also provide insight into how deportation and deportability are experienced by individuals, including Arabs, South Asians, and Muslims in the United States. One contributor looks at asylum claims in light of an unusual anti-deportation campaign mounted by Algerian refugees in Montreal; others analyze the European Union as an entity specifically dedicated to governing mobility inside and across its official borders. The Deportation Regime addresses urgent issues related to human rights, international migration, and the extensive security measures implemented by nation-states since September 11, 2001. Contributors: Rutvica Andrijasevic, Aashti Bhartia, Heide Castañeda , Galina Cornelisse , Susan Bibler Coutin, Nicholas De Genova, Andrew M. Gardner, Josiah Heyman, Serhat Karakayali, Sunaina Marr Maira, Guillermina Gina Nuñez, Peter Nyers, Nathalie Peutz, Enrica Rigo, Victor Talavera, William Walters, Hans-Rudolf Wicker, Sarah S. Willen

Mexican Migrants and the Rise of the Deportation Regime, 1942-2014

Authors: Adam S. I. Goodman
Categories:
This dissertation traces the rise of the deportation regime in the United States from 1942 to the present. It reveals that the origins of the regime are inextri

Authors: Nancy Hiemstra
Categories: Social Science
Detention and deportation have become keystones of immigration and border enforcement policies around the world. The United States has built a massive immigrati

The Handbook of Deviance

Authors: Erich Goode
Categories: Social Science
The Handbook of Deviance is a definitive reference for professionals, researchers, and students that provides a comprehensive and engaging introduction to the s

Authors: Nazli Kibria
Categories: Social Science
Immigration has long shaped US society in fundamental ways. With Latinos recently surpassing African Americans as the largest minority group in the US, attentio

Authors: Ethan Blue
Categories: History
A history of the United States' systematic expulsion of "undesirables" and immigrants, told through the lives of the passengers who travelled from around the wo

A Companion to Border Studies

Authors: Thomas M. Wilson
Categories: Social Science
A Companion to Border Studies introduces an exciting and expanding field of interdisciplinary research, through the writing of an international array of scholar

Authors: Gian Luigi Gatta
Categories: Law
This book provides a systematic and comprehensive overview of the increased role of criminal law in managing migration, from a European, domestic and comparativ

Authors: Robert T. Chase
Categories: Social Science
This volume considers the interconnection of racial oppression in the U.S. South and West, presenting thirteen case studies that explore the ways in which citiz